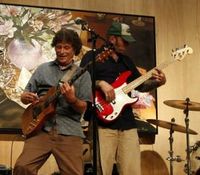 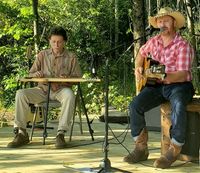 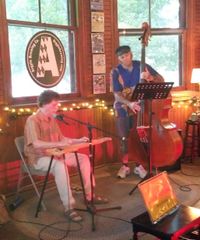 Barry Hyman was born in 1951. His father was the literary critic Stanley Edgar Hyman, and his mother was the author Shirley Jackson, most famous for her chilling short story “The Lottery.” But instead of becoming a writer like his parents, he started music lessons as a child.

His first public appearances were at summer camp, singing harmony with his sisters – he wore sunglasses and played bongo drums, a young beatnik folkie. Then in 1964 he started playing guitar and harmonica, performing original songs and imitating Bob Dylan. By 1966 he had his first electric rock band, The Magic Show, doing mostly blues, Beatles, and Rolling Stones covers.

His father was a blues record collector, his older brother Laurence was a professional jazz trumpet player, and his godfather was the famous African American novelist Ralph Ellison, so Hyman’s most important musical influences in his formative years were unusual for a white boy from Vermont – rhythm and blues, Motown, soul, blues, and the Memphis sound. But he was also expanding in other directions as well – he got his first sitar in 1967, inspired by George Harrison. In 1969 he heard pedal steel guitar on an album by the Byrds, and was immediately riveted. He had avoided country music up until that point, because, as a longhaired hippie, he was constantly being beaten up by rednecks who listened to country. But he thought the sound of pedal steel was so hypnotic that it began an obsession that has continued to this day. It took him until 1972 to get his hands on one, but then he started teaching himself immediately and was performing pedal steel with a country band by the next year.

Hyman was a music major at Antioch College in Ohio from ’69 to ‘73, studying classical music and composition. Up until then his musical tastes had been primarily folk, blues, rock, r&b, and country, but at Antioch he studied with composer John Ronsheim and was heavily influenced by Ronsheim’s interest in experimental avant-garde jazz composer Cecil Taylor. Hyman played in a campus rock band, The Sympathy Junk Band, which, in retrospect, was one of the earliest punk bands. They had all of the mythic experiences that a sixties rock band were supposed to have – they played 45-minute nonstop improvs, pretended to smash their equipment at the end of each show, shared acid-laced punch with their audiences, got arrested for indecent exposure at a concert at a Catholic high school (the harmonica player removed his shirt), and managed to leave all the bandmembers and their devoted fans with permanent hearing damage. But during these same years Hyman was giving soft solo concerts of his original songs on acoustic twelve-string and sitar, playing in eclectic folk bands, and composing baroque-style fugues in class!

Back in Vermont after college Barry continued his musical schizophrenia. While playing pedal steel in redneck country bands at night to make money, he spent his days with the Black Music Department at Bennington College, which was being led by jazz trumpeter Bill Dixon. For the next three years Hyman pursued his education in avant-garde experimental music, performing in several of the “black music” ensembles (including one notoriously intense 18-piece group led by Henry Letcher, Duke Ellington’s nephew). He met Derrik Jordan and Jared Shapiro there in 1973 and began the musical collaboration that has continued to this day as the band NATURAL HISTORY. He bought some recording equipment, started the Sweet and Happy label, and began releasing cassette albums of original music. But the most important development during those years was that Hyman fell under the influence of Milford Graves, who had just begun teaching at Bennington. Milford Graves is a world-famous percussionist, included in most lists of the best drummers of all time. But he is also an acupuncturist, herbalist, martial artist, and one of the most innovative thinkers in modern medicine, who continued, until his death in 2021, to do ground-breaking work combining the best of traditional Oriental, African, Indian, and Native American healing arts with modern Western scientific medicine and his unique artistic perspective as a master musician.

Hyman was tremendously excited by Professor Grave’s concerts, and was also inspired by the African dance music Graves exposed him to, but what he actually studied with Milford was acupuncture, anatomy, physiology, and neuroscience. This was the beginning of Hyman’s lifelong interest in healthcare, medicinal music, and music therapy. He studied with Milford casually from ‘75 to ‘81, and then underwent an intense tutorial at Graves’ International Center for Medicinal and Scientific Studies from ’82 to ’84. By the end of that period Hyman was practicing acupuncture and herbal medicine himself.

In 1984 Hyman moved to San Francisco, looking for opportunities as an acupuncturist, and for musicians who shared his new interest in African and Caribbean music. While there he met his wife Chung Ah, who had left her home in Seoul, Korea to study in America. He also played in several bands, performed in many of the venues in San Francisco and the East Bay, and continued releasing recordings.

Hyman and his wife moved back east in 1988, eventually buying a house and 15 acres near his old home town. The interest in clinical healthcare morphed into a preference for holistic music instruction and music therapy, and he began to build up his hobby of teaching guitar, which he had started in ‘77, into a fulltime job. He had a rich benefactor who was willing to pay his way through medical school, but he gradually realized that music was the form of healthcare that he was destined to practice.

Since then he has spent his time performing, recording, and teaching music, giving private lessons as well as classroom instruction at schools and colleges. In 1990 he won a grant from The Vermont Council on the Arts for a musical composition celebrating Nelson Mandela’s release from prison. In 1995 he released his first cd, “Hill Country Witch Doctor.” From 1995 to 2000 he played in the band SIMBA, a horn-driven jazz, Latin, reggae, and funk band based in Brattleboro, Vermont. Throughout the nineties he developed his guitar teaching curriculum and kept revising successive editions of his 340-page guitar manual, “Smart Guitar.” In 1998 and 1999 he was the host of a weekly radio show on WRPI, Troy, NY called “Talkin’ Blues About The News,” where he punctuated his radical two-hour monologues on current events with snippets of live guitar improvisation.  In 2000 he was asked to be the Artist-in-Residence at Southern Vermont College. In 2001 he started the band ZUELA with two very young students, Lyle Somers and Lucas Sconzo, as a vehicle for performing his instrumental worldbeat compositions. In 2004 he released “In My Country,” an album of highly politicized spoken word (its release was timed to diminish Bush’s chances for re-election), and later that year he released his highly-regarded instrumental cd “More Than Halfway Home,” which features Hyman’s older brother Laurence on flugelhorn. For several years he ran a Summer Music Program to teach ensemble playing to young musicians. In 2007 he joined the HILL HOLLOW BAND as a pedal steel player, and since then pedal steel has gradually become his primary instrument. In 2008 Hyman built a teaching studio in the woods on his land, next to a flowing mountain stream and his organic garden, and he plans to stay in that beautiful sunlit room, teaching, composing, and recording, until he dies happily of old age.  In 2016 he formed the Dread Resistors, a reggae band with some musicians from Ghana.  He formed JESTER FRETLESS, a duo with bass player Jared Carrozza, when the Dread Resistors broke up in 2019, and through the pandemic years, when most venues were closed, Jared and Barry have concentrated on making music videos.

2002  The Vermont Line (CD with the singer Nathan Knowles)

2001  Sound Awake (CD with the band Barry Hyman and Friends)